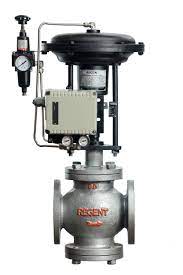 When the valve stem reaches a balance with the process variable instrument controller’s output signal, the valve positioner increases or decreases the air load pressure pushing the actuator.

The feedback for these two basic designs is provided to the controller by mechanical linkages mounted directly to the stem of the valve. Whenever a change in position is signaled to the positioner by the process controller, the feedback linkage communicates this change back to the positioner, confirming that it has taken place and providing a sense of its magnitude.

Similarly, a Digital Valve Positioner receives a signal from a controller (usually 4-20mA, HART, PROFIBUS, or Foundation Fieldbus); however, it’s a digital signal instead of an analog one. A corresponding pneumatic signal then triggers a pneumatic valve actuator.

Microprocessors are also used in an EP Positioner rather than mechanical beams, cams, and flappers to convert the control signal and control the position.

It allows the user to perform more advanced functions by using the electrical input. The “smart positioners” also notify the user when valve performance, diagnostics, and maintenance need to be performed.

An input signal from a pneumatic device opens or closes valves by sending pressure. They use a flapper/nozzle system that requires compressed air for everything to work correctly. In order for the controller’s data to be received, a sign of 3-15 pounds per square inch must be present. A bellows expands or compresses in response to an input signal.

Read more:Each And Everything You Should Need To Know About Salient Pole Rotor With Description

Moving the bellows can move the flapper assembly and beam measuring valve stem feedback. This process involves the flapper moving towards or away from the nozzle. The relay controls the air output to the valve actuator by increasing or decreasing its voltage. Through the beam, the valve stem sends feedback when it moves. The valve will be positioned appropriately when the air output decreases or increases according to the input signal.

Analog signals, typically 4-20 milliamps, are sent from a controller to electro-pneumatic positioners. When an electric signal is applied to a coil, it produces an electromotive force. In response to this force, the flapper moves, increasing or decreasing the airflow to the actuator of the valve. As well as providing feedback, the valve stem and positioner enable the valve actuator to be adjusted as needed.

When the positioner is attached to the actuator, it can measure the stem travel for linear valves or the degree of rotation for rotary valves. As well as changing the valve position according to the instrument controller input signal, this also changes the instrument’s part.

Positioners receive electrical or pneumatic signals from the instrument controller when the process variable varies from the set point. This way, the valve can be opened or closed based on the pneumatic output from the actuator. As long as the desired set point is not reached, this process continues.

The following circumstances warrant the consideration of a positioner:

A minimum amount of friction is observed, which causes hysteresis and headband.

Through the use of signals, valve positioners improve and refine fluid system control. An actuator’s spring rate range can vary by as much as 8 percent, but this precise control helps to compensate for this variation.

The positioners are used to control valves by placing a distance between the controller and the valve and using diaphragms or pistons. The flow characteristics can also be changed when necessary, as well as switching between direct and reverse control actions. It is even possible to use one controller to control two valves simultaneously (i.e., split ranging).

It can indicate control loop instability if the differential pressure across the valve varies. The position of a valve can be stabilized with the help of a positioner.

A valve positioner provides more precise control than a single actuator because it can determine the exact position of the valve. Additionally, positioners increase accuracy in valve strokes at the bottom, where errors are more likely to occur.

In what ways does a positioner increase the response time of a control valve?

Valve positioners provide “stem position feedback” in the control loop by causing a change in controller SIG output to change positioner LOAD output, resulting in valve stem movement. After travel, the mechanical feedback linkage “confirms” that it has occurred.

How does a valve positioner with an actuator work?

Using a positioner as an amplifier or booster for signals is possible. To ensure that the valve reaches the desired position, the actuator diaphragm receives a low-pressure air control signal and multiplies that using its higher pressure input.

In instrumentation, what does a positioner do?

By increasing and decreasing the air load pressure driving the valve’s actuator, the Control Valve Positioner ensures the valve’s stem is balanced with the process variable instrument controller’s output signal.

What are the ways in which positioners improve safety?

Positioners eliminate those hazards by eliminating chains, straps, hoists, and cranes from the assembly and welding process. Elements and assemblies are raised and positioned to the optimal height, rotation, and working position by positioners.